January Volunteer of the Month 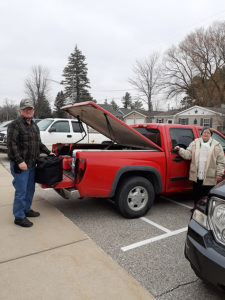 Arn Hammond and his helper, Terry Smith, are being honored as January’s Volunteers of the Month for their work as Meals on Wheels volunteers. Arn and his wife had moved to the apartments in Coleman from the Midland area when she got ill and start going to the center for lunch and some socialization. When she passed on a few years ago, Arn started delivering Meals on Wheels. He and his son delivered initially and now Terry Smith helps him. What motivates them to volunteer? Arn says, “People need meals! I love doing it. I like meeting people and getting to know them.” Terry adds, “I see these people as needing someone to help them a little bit. I want to be useful.” Sheryl Watson, Coleman Center Director, says, “Arn is one of the best volunteers ever. He does whatever we ask of him – no complaints ever. He is very caring and thoughtful of the clients – I appreciate Arn looking out for our clients at home. He’s a fun person to work with. He called me the other day, out of the blue, to see if I needed a volunteer driver. And I did need one! I told him he was an angel to save the day, but he said his wings were clipped. I told him just as long as his vehicle still drives!” Sheryl adds, “Terry came to us a couple of years ago and she fit right into the center immediately. She serves on our Friendly Folks board and is one of the first ones to step up when we need a volunteer, no matter how big or small the job. Arn and Terry are good friends and they are our heroes, because they were right there with us, delivering every week since the pandemic started!”

Arn is retired after driving a gravel truck for 36 years. He has four children and a “bunch” of grandchildren and great-grandchildren. He also got married again this past September! He says he has found “such joy” in delivering Meals on Wheels and a lot of self-satisfaction helping people who might not have family nearby.

Terry moved to Coleman from Missouri three years ago to be near her son and his wife. She was a stay-at-home mom for years and has six grandchildren. She said she and Arn handed out Christmas cards to the people on their Meals on Wheels route a couple of weeks ago and she really feels it made an impact on those people. Arn says, “She’s a big help. She’s a good person – really good with people!”

The Meals on Wheels program provides nutritious and especially delicious meals delivered to an older adult’s home by a friendly volunteer. Most Meals on Wheels drivers take one route a week – usually taking about two hours to complete and we reimburse you for your mileage. The Coleman Center could really use a few more drivers!

Arn and Terry, thank you so much for all that you do with cheerful hearts!! Congratulations on being chosen as the January Volunteers of the Month!