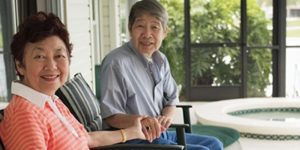 Parkinson’s disease dementia is a decline in thinking and reasoning that develops in many people living with Parkinson’s at least a year after diagnosis. The brain changes caused by Parkinson’s disease begin in a region that plays a key role in movement, leading to early symptoms that include tremors and shakiness, muscle stiffness, a shuffling step, stooped posture, difficulty initiating movement and lack of facial expression. As brain changes caused by Parkinson’s gradually spread, they often begin to affect mental functions, including memory and the ability to pay attention, make sound judgments, and plan the steps needed to complete a task.

Causes and risk factors
An estimated 50 to 80 percent of those with Parkinson’s eventually experience dementia as their disease progresses. Some studies have reported that the average time from onset of Parkinson’s to developing dementia is about 10 years.

Additional risk factors may include:

There is no single test — or combination of tests — that conclusively determines that a person has Parkinson’s disease dementia.

Guidelines for diagnosing Parkinson’s disease dementia and DLB are:

There are no medical treatments to slow or stop the brain cell damage caused by Parkinson’s disease dementia. Current strategies focus on improving symptoms. If your treatment plan includes medications, it’s important to work closely with your physician to identify the medications that work best for you.

There are many non-pharmacological interventions that may help the person living with PD Dementia to improve their quality of life. Some of these may include: physical exercise focused on balance; cognitive activity designed for memory, concentration and language; and use of adaptive equipment (i.e. U-Step walker, weighted silverware)

Senior Services offers an array of memory support programs including free and confidential memory screenings to obtain a cognitive baseline, our early memory loss program, and educational classes along with support from Seasons Adult Day Health Services. If you or someone you know is experiencing increasing changes with their memory and could benefit from additional services, please contact Amy Sheridan, Family Support and Activity Manager at 989-633-3764.

Please continue to check out the section, Our Mind Matters, next month.