Why should you send an anti-ageist birthday card? 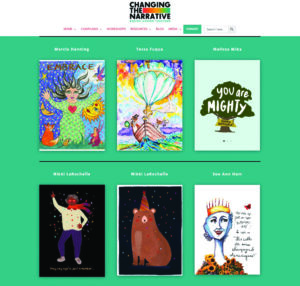 In 2020, Changing the Narrative launched an anti-ageist birthday card campaign, calling for artists to design cards that countered the usual – a depressing narrative about getting older. The resulting designs defy negative views and celebrate the joys of aging. In response to their anti-ageist birthday cards, people shared that they want to see more clever and fun messages without all the age-bashing about sagging body parts and increasing irrelevance. The campaign focus became gathering cards with messages that produce a smile or even a laugh in celebration.

Some background about ageism in greeting cards
In their blog, they share many stories of older people giving back, taking care of others, starting businesses, working on the front lines, etc. These stories represent the diversity and reality of today’s older adults, who are living longer and play vital roles in society.

If you buy a birthday card for an older person, however, this is often not what you see. Instead, you’ll be inundated with negative stereotypes of older people as sleepy, crabby, and weak. You’ll see lots of ableism. According to these cards, we should feel bad about aging.

We know that ageism is both prevalent and harmful. Studies show that ageism has negative effects on our health and financial security – even on how long we live. We even inflict these ideas on ourselves because we’ve internalized the ageism surrounding us.

Humor doesn’t have to be mean
Our 2020 cards showcased beautiful, warm themes that celebrated age. They resonate with many people, as we hoped they would. Many of us also love funny cards and cards that are silly or clever. People have defended the worst of the ageist cards as “just a joke” or a little humor just between the sender and receiver. But, we have a few thoughts about that:

If you would like to view the gallery of cards, or send one to a friend, visit changingthenarrativeco.org/anti-ageist-birthday-card-gallery/.

About
Changing the Narrative is a non-profit organization out of Colorado funded by NextFifty Initiative and Rose Community Foundation. Changing the Narrative builds on five years of national work initiated by eight leading aging organizations that recognized a shared challenge: that what they were seeking to communicate about aging and ageism, and the social challenges and opportunities posed by demographic change, was not getting through in the way intended to the general public. They engaged FrameWorks Institute to research how the public thinks about aging and ageism, and to test messages that could shift thinking in a positive direction. This resulted in a toolkit and training trainers who could teach others effective ways of communication about aging and ageism.