Plums: A Sweet Fruit with a Juicy History

By Bethany Oxender, MS, RDN, based in Ann Arbor, MI 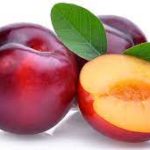 Succulent plums, the muse of fruits. Plum remains have been found in archaeologic sites traced to the Neolithic age. Over time, they’ve transcended the table and infiltrated culture, are linked to good fortune in China and are revered as sacred in Serbia. Plums’ name was once synonymous with everything sweet, such as the Sugar Plum Fairy in the Christmas classic The Nutcracker. Centuries of cultivation led to generations of hybrids and, today, more than 2,000 varieties of plum exist.

Plums are drupes, fleshy fruits that encase a single seed within a tough shell. Known for deep purple hues, plums come in a range of colors, including white, yellow, green and red. Plum trees withstand cold temperatures and require little maintenance once established — desirable traits for novice gardeners. However, a tree may take three to six years to produce fruit. Plum trees blossom in late winter or early spring, depending on climate, then bear ripe fruit from May to September.

During the late 19th and early 20th centuries, botanists Luther Burbank and Floyd Zaiger took interest in crossbreeding plums with other fruits. This was prior to the development of genetic engineering and has been described as a traditional modification or breeding method. The first result was the plumcot, a plum-apricot hybrid. In the mid-20th century came pluots, the offspring of Japanese plums and apricots. Later came apriums, also a plum-apricot crossbreed but with primarily apricot traits including fuzzy skin. Each hybrid has a subset of varieties with differing flavor, appearance and flesh color.

In the Clinic: A standard plum has 35 calories, 8.5 grams of carbohydrate and 1 gram of dietary fiber, making it a low-calorie food. Plums also contain antioxidants and phytonutrients, including flavonoids such as anthocyanins that influence the fruit’s color, and the carotenoids beta-carotene, beta-cryptoxanthin, lutein and zeaxanthin.

Dried plums, also known as prunes, have a reputation for aiding bowel regularity. One study found prunes to be more effective than psyllium, a popular powdered supplement, for the treatment of mild to moderate constipation. Additionally, prunes are a source of boron, a mineral that may play a beneficial role in bone health.

In the Kitchen: Eating a ripe plum on its own is common, but if you’re seeking other ways to enjoy this fruit, there’s no shortage of options. Combine diced plums with bold ingredients such as soy sauce, garlic and ginger to create a robust salsa. Slice and roast plums flesh side down to caramelize their natural sugars, then drizzle with honey or dip into mint pesto.

Plums shine in pastries, too. Poaching or stewing softens the fiber for a filling, sauce or compote. Peeling plum skin is optional; skin pieces add texture but may be unpleasant in smaller pastries such as turnovers. Removing the pits is nonnegotiable but can be done either before cooking to ensure none are missed, or after cooking if you prefer the convenience of preparing whole plums. Be sure the fruit has completely cooled prior to removing pits.

As an alternative to oil or applesauce when baking, use prune puree. Prunes contain pectin, sorbitol and malic acid, which add volume and moisture and enhance flavor by trapping air and contributing to a smooth mouthfeel, similar to fat.

In Quantity: When ordering plums in bulk, assume 1 pound equals approximately six medium-sized fresh plums or about 2½ cups sliced. Plums are best shipped between 32 degrees and 34 degrees Fahrenheit and should not be stacked more than one layer when displayed to prevent bruising.

Keep unripe plums at room temperature to soften. A ripe plum feels heavy and yields to slight pressure at the bottom, opposite the stem. To extend shelf life, store ripe plums in the refrigerator for three to five days. Over-soft, almost mushy or cracked plums are past their prime. If you have an abundance of ripe plums, consider removing pits and slicing or chopping, then freeze for up to 12 months.

Wash plums before eating to remove the “bloom,” a waxy-white residue on the surface, like that on grapes. This natural coating is safe and a sign of freshness, but cleaning reduces exposure to potential pesticides and bacteria.