Viscount of Verse, Lord of the Limerick

“It’s an affliction of some kind, and I don’t think there’s a vaccine against it, either.”-Dick Votaw 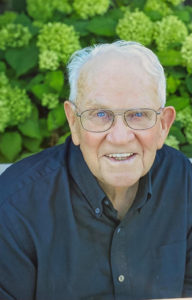 It’s a malady, much like a curse
It compels lousy rhyming and worse
But it seems like such fun
Just to pen a poor pun
And annoy my good friends with bad verse.

Dick Votaw doesn’t remember exactly when he wrote his first limerick. “The very first one was probably lost in obscurity, but I think that in high school the English teacher probably demanded that we write something, and I think I wrote a limerick, but it is lost. I have no idea what it was about.”

“The first one I ever wrote down and kept was when we were going on a trip with the kids. We didn’t have all the entertainment they have in cars nowadays, so I just started something like, ‘There once was a pirate named Pete…’, and then the kids changed it to a peg-legged Pirate named Paul who ended up having a fall. Anyway, he ended up with a broken leg…”

There was a peg-legged pirate named Paul,
Who splintered his leg in a fall.
On his way to a feast,
He said, “Mates, at least,
Now we have toothpicks for all.”

Dick calls that one a “hundred-mile limerick”, and he especially likes that one because the kids collaborated on it. But he didn’t start writing limericks in earnest until years later when he began composing them for colleagues at Dow who were retiring. He’d give it to them, and it was better than a Hallmark card because it was personalized.

They’re not wrapped in fine ribbon nor bow
But we cherish our friendships, and so
It’s with true grateful voice
We give thanks and rejoice
‘Cause, we know that our cups overflow.

In retirement, Dick has more time on his hands, but instead of doing crossword puzzles, he writes limericks. In fact, he has written well over six hundred of them! He has boxes of them, mostly finished, but also a few works-in-progress. He seems to have no shortage of inspiration. He’s a member of a potluck group that’s been meeting since the 1950s, and he has some buddies who go golfing with him. And then there were those fishing trips to Canada. There’s always something funny that happens when he’s with those people, so he’s never short of ammunition.

Some of his limericks are based on jokes he’s heard. “The limericks are original, but there’s no such thing as a new joke or pun.” He’ll read one somewhere, or hear one in conversation, and then he’ll craft it into a limerick.

An old hydrant broke open one day
And it covered my dog with a fine spray
But that’s OK with me,
Philosophically,
I believe turnabout is fair play.

A romantic hillbilly named Bill
Loved a lady moonshiner named Lil.
Though they drifted apart
There’s a place in his heart
Where he fondly remembers her still.

Saddle up! and watch out for them burrs
And brand only them cattle that’s yers.
Be as good as yer word
Drink upstream from the herd
And don’t squat when yer wearin’ yer spurs.

A cheese factory in Quanicassee
Exploded quite violently.
There was Swiss in the air
Camembert everywhere
On the ground, all around, lay da Brie.

One of Dick’s greatest sources of inspiration is his late wife, Ann, with whom he often attended educational programs at Senior Services.

Every Valentine’s Day I take time
Just to toast this good fortune of mine
I’m so grateful that I
Am the luckiest guy
To have married my Best Valentine.

Limericks don’t come into his head fully formed. Ideas come to him, he jots them down, and then he tinkers with them until they are finished, or he files them away to be worked on later. “It’s like being the village blacksmith… you beat the thing, torture it, until it seems to make sense.”

You have probably seen some of Dick Votaw’s limericks in this very newspaper, and undoubtedly you’ll be enjoying many more of them!

Pronoun Perfect
The strict grammar instructor, Magee
Drilled her class in pronouns, endlessly
She asked Sammy for two
But he hadn’t a clue
He sat up with a start, said, “Who? Me?”

Limerick Responses
Each reader responds in their style
A giggle, a gasp, or a smile,
A short muffled snort
And eye roll of some sort,
Or a belly laugh once in a while.

The Procrastinators Club
This fine club suits my style, so I hear.
I need help, I must join, that is clear.
Maybe not right away
But I’ll do it someday
Guess I’ll just put it off ‘til next year.